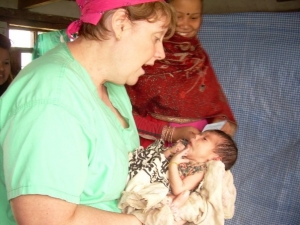 At the tender age of eleven years old Kathi “heard” the Holy Spirit call her into foreign missions. Unsure of the ministry vehicle that God wanted to use to send her, after graduating from high school she decided to go to college to pursue a degree in nursing. Upon entering nursing school she felt called to obstetrical nursing. While initially this call seemed much too enjoyable to be a calling from God, working in a Labor and Delivery unit in an urban hospital just south of Philadelphia became much more challenging after Kathi and her husband, Mark, lost their second baby in the sixteenth week of her pregnancy in 1987.

However, in July of 2001 Kathi had her first taste of foreign missions with a youth team from Calvary Chapel of Delaware County to Trinidad. On subsequent medical missions God confirmed that her calling to this area of nursing was preparation for what was to come. Since that time Kathi has participated in and assisted with training and leading an average of two foreign missions each year.

Kathi enjoys singing, drama, swimming, spending time with Mark – her best friend, adviser, biggest supporter, and husband, as well as her son, Jason and daughter-in-love, Jen and her grandson, Corey, teaching women’s Bible studies, and public speaking, especially to parents who are living through the trauma of losing a baby. Kathi’s book, Our Baby, Our Love, Our Loss, can be found on-line through the publisher, Wheatmark and on Amazon.

In 2007 Kathi received the Crozer Chester Medical Center Bertram Speare “Spirit of Crozer” Award for community service. She was also awarded the Nursing Excellence Award in Clinical Nursing by Crozer Chester Medical Center in May of 2010. In October of 2010 Kathi received the prestigious Florence Nightingale Award in Clinical Nursing for the state of Pennsylvania. In 2011 she received the Nursing Spectrum Nurse Excellence Award in Community Service. Main Line Today Magazine, Philadelphia, Pa. honored Kathi as a “Health Care Hero” in May 2013.

A scripture verse that summarizes Kathi’s excursion from a call heard as a child to the birth of TLM many years later is found in Ecc. 11:1 – Cast your bread upon the waters, For you will find it after many days.